The Defence, Evaluation & Research Agency (DERA) site in Weymouth has been subject of several failed planning attempts since it’s closure towards the end of the last decade and as a result the area has gradually become more derelict. There are signs of continued use in a couple of buildings in the QinetiQ site but these are fenced off & during a two-day explore we saw no one.

Once inside, we headed for the Mechanical Science sector where some nice details still exist, including a 5ft dummy torpedo. We then moved across the road in to the main factories & workshops. Over 300ft in length the workshops take up most of the QinetiQ site. At one end, a tank for minesweeping technology & research and at the other end, an enormous sorting & recycling machine. In between, several workstations & offices branch off the sides of the long corridor. In one section, hundreds of building blueprints, torpedo schematics & general paperwork litter the floor – most of which I’m sure would have been top secret at some point, or may well still be!

DERA is an agency of the Ministry of Defence, incorporating the bulk of the  non-nuclear research, technology, test and evaluation establishments. It is one of Europe’s largest research organisations with a turnover of approximately £1 billion and about 12,000 staff (info. circa 1999).

Our next stop was back across the road in to the boiler house and canteen. The employees at QinetiQ were a lucky lot, according to the menu a full English breakfast only cost them £1.79 back in 2005!

With one building left to explore it was looking like we’d been defeated and all viable entrances to the test cells were locked. Until an open door, which at first looked like an electrical cupboard, led us through a small, dark corridor and emerged inside. In the centre of a test cell was a rig where I assume a torpedo would have sat and been monitored and put through it’s paces before being ferried to the torpedo firing point on the harbour breakwater wall.

Exiting the test cells we noticed that opposite on the breakwater, behind a second fence, that there was actually part of this site which was still live. Torpedo Pier (as it’s named on charts) has been in continued use since the closure of the main QinetiQ area. I have since been in contact with the site operator who has confirmed that the breakwater and buildings on & around Torpedo Pier is indeed a live site, monitored by 24 hour CCTV, and shouldn’t be explored.

At that point we made our way out of the site with the sun setting in the distance behind the QinetiQ site, it was a perfect end to a brilliant, local explore and one I can’t believe I took so long to see! 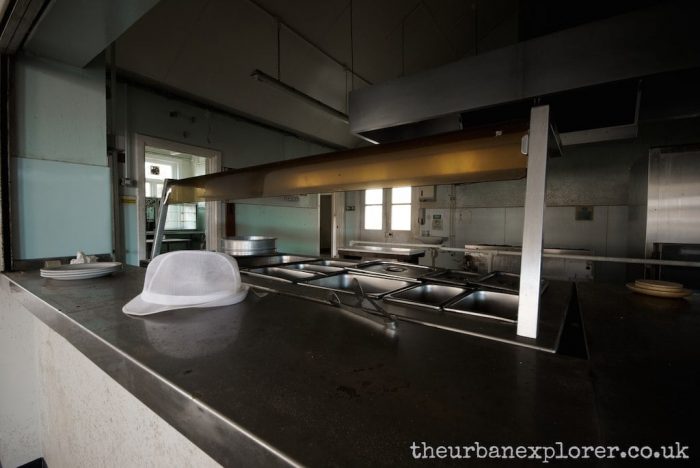